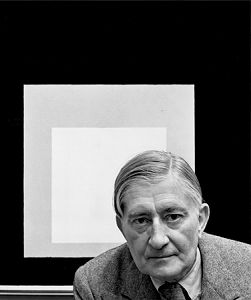 Albers was born in Bottrop, Westphalia (Germany). He studied art in Berlin, Essen, and Munich, before enrolling as a student at the prestigious Weimar Bauhaus in 1920. He began teaching in the preliminary course of the Department of Design in 1922, and was promoted to Professor in 1925.

With the closure of the Bauhaus under Nazi pressure in 1933, Albers emigrated to the United States. There he joined the faculty of Black Mountain College, North Carolina. In 1950 Albers left Black Mountain to head the Department of Design at Yale University in Connecticut.

In 1971, Albers with his wife, textile artist Anni, founded the Josef and Anni Albers Foundation.

Albers continued to paint and write until his death in 1976.