Mariano di Jacopo detto il Taccola (1382 – 1453), called Taccola ('Crow') was an Italian administrator, artist and engineer of the early Renaissance. Taccola is known for his technological treatises De ingeneis and De machinis, which feature annotated drawings of a wide array of innovative machines and devices. Taccola’s work was widely studied and copied by later Renaissance engineers and artists, and perhaps even Leonardo da Vinci.

He was born in Siena in 1382. He pursued a varied career in Siena, working in such diverse jobs as notary, university secretary, sculptor, superintendent of roads and hydraulic engineer.

Taccola left behind two manusripts. The first is De ingeneis (Concerning engines). He worked on it since 1419 until 1433. Taccola continued to amend drawings and annotations to De ingeneis until about 1449. In the same year, he published his second manuscript, De machinis (Concerning machines).

His artworks are drawn with black ink on paper and accompanied by hand-written annotations. Taccola depiced in his work a multitude of 'ingenious devices' in hydraulic engineering, milling, construction and war machinery.

Below, you can see an artwork from De ingeneis with a simple water lock. The odd thing is that the mechanism for lifting the lock is clearly an impossible figure, but probably is a design error. 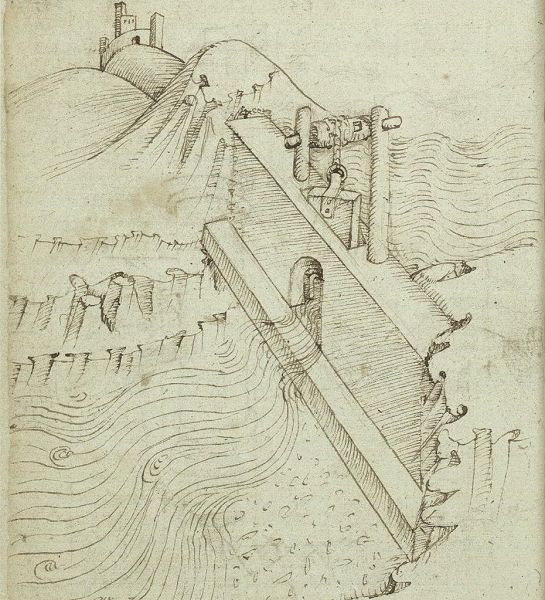 The image was found at http://bibliodyssey.blogspot.com/2006/11/engineering-renaissance.html