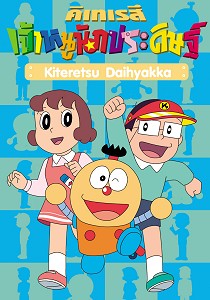 Kiteretsu Daihyakka is a science fiction manga series by Fujiko Fujio which ran in the children's magazine Kodomo no Hikari from 1974 to 2000. The manga was later made into a 331-episode anime TV series which ran on Fuji TV from 1988 to 1996.

There are impossible triangle, ambiguous stars and interpretation of Escher's artwork "Another World II" with Mona Lisa in the ending of a one episode. You can see screenshots below.