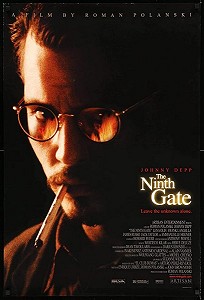 The Ninth Gate is a 1999 mystery thriller film directed, produced, and co-written by Roman Polanski. The main character Dean Corso was played by Johnny Depp.

A rare book dealer, while seeking out the last two copies of a demon text, gets drawn into a conspiracy with supernatural overtones.

In the film we see an impossible pentagram on book covers.