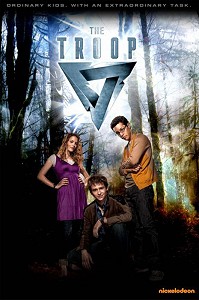 The Troop is an American-Canadian comedy-adventure television series about a trio of teenagers who fight and capture monsters and other supernatural phenomena that invade the fictional town of Lakewood.

A variation of impossible triangle is a logo of secret society, in which main characters work. It appears in various contexts, on monitor screens, documents, weapons, cloths and special equipment. Below, there are several screenshots with such examples. They took from both seasons of the TV series. Click on images to see them in better quality.