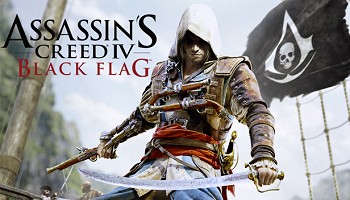 This part continues confrontation of assassins and templars. The main story of this game follows the adventures of pirate Edward Kenway in the Golden Age of Piracy. The minor story line of the game shows work of emplyee of Abstergo Entertainment, who recovers memories of Edward Kenway.

All computers in Abstergo Entertainment have impossible triangles on their lock screens. Red color of triangle shows, that there are some problems with the computer.