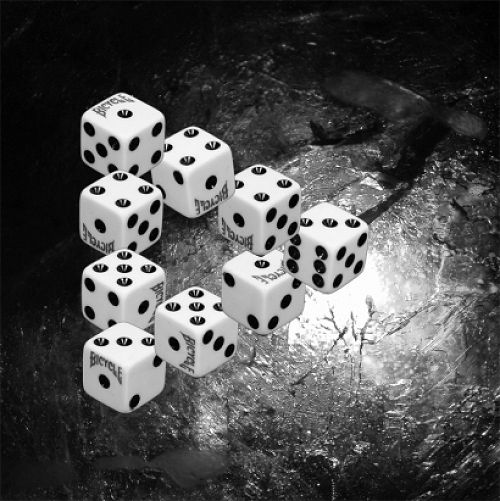 The image was found at http://www.dorkbot.org/dorkbotsea/events/pdstwe2/donaldcmartin.html

Bohr developed the initial quantum atom theory and Einstein found the use of probability in quantum theory unacceptable. The dice are arranged in a physically impossible form, a Penrose tribar, which seems to both represent the counter intuitive nature of quantum theory as well as the chance element. The dice also refer to Einstein's famous quote about God and dice. The quantum atom now assumes an electron shell that is described in terms of probabilities and Hawking's quote refers to quantum theory applied to black holes.

Dr. Martin started his academic career with a fine sense of indecision. His initial majors were both electrical and mechanical engineering. He then switched to physics and then psychology. By the time he was forced to graduate he happened to be in mathematics. A chance remark caused him to start graduate work in statistics although he had never had a statistics course. His initial academic appointments were in Biomathematics and Engineering Research at North Carolina State. He then moved to the University of Washington in Biostatistics with an Adjoint appointment in Psychiatry and Behavioral Sciences. He has approximately 100 scientific publications and hands on experimental experience. He retired from UW about 5 years ago.

In the distant past he was a serious medium format and an early underwater photographer. After retirement from UW he returned to photography and tried digital photography. After three months of digital work he gave away his darkroom equipment. He is currently running a small photography business and exploring some of the possibilities of computer manipulation of images.