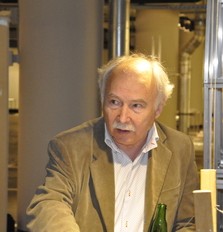 Vyacheslav Koleychuk was born in 1941 in Moscow region. He graduated from Moscow Institute of Architecture in 1966. The main direction of his work is kinetic art, which is art from any medium that contains movement perceivable by the viewer or depends on motion for its effect.

His works are stored in many collections of Russian museums and also in USA, Great Britain etc. He took part in many exhibitions in Russia and abroad. In 2012 there were two his personal exhibitions in Moscow Planetarium and Stroganov gallery.

Created in 1969. First photo of the sculpture was published in Russian magazine "Tekhnika molodyozhi" http://tm.itizdat.ru/docs/Archive/TM_04_1972.

He also created some pencil drawing with impossible figures.