Octavio Ocampo was born in Celaya, Guanajuato, Mexico in 1943. He studied at the "La Esmerlda" Fine Art Institute in Mexico City (1961-1965) and the San Francisco Art Institute (1972 - 1974). He made set designs for more than 120 Mexican and American films and set designs for plays. He has been exhibiting since 1972 in Mexico, USA, Canada, Latinamerica, Europe and Middle East.

Octavio Ocampo is famous for his ambiguous artworks. His artworks show us men faces from afar, but when you move closer you see that the whole image fall into smaller separate pieces, which are small figures of men, animals etc. You can see many such artworks at his site http://octavioocampo.com.mx.

But he also created an image with impossible columns. Here we see three columns at the top and three columns at the bottom, but they are shifted by with of column. Artist also added his favorite illusion techniques to the artwork. You can see a face in folds of white cloak of the man, who stands to the right of the columns, and faces in shades of cone trees and in the shape of entablature. 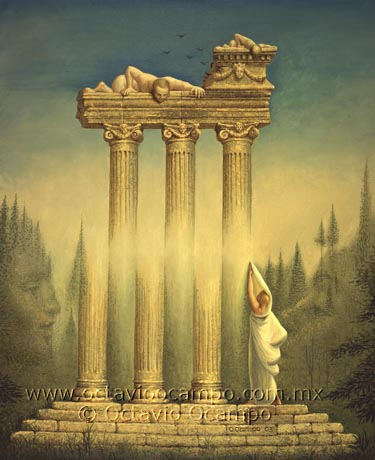