based on article Henry Segerman
http://www.segerman.org/printgallery/ 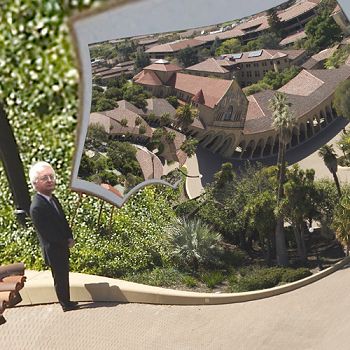 Sometime in 2002, Paul-Olivier Dehaye and Henry Segerman went to a lecture given by Hendrik Lenstra (Universiteit Leiden and previously UC Berkeley) about his investigations into Escher's Printgallery at the Stanford math department. He initiated the project (with, and currently run by Bart de Smit, also Universiteit Leiden) to recreate Escher's image and 'fill in the hole'. See their website for their results, and the theory behind both what they and they did. Namely, the obvious extension to their work was to do the same with photographs rather than line drawings. The same twisting technique works with any image that contains a 'picture frame' within it that the whole picture can be put inside of. When they heard that Lenstra would give a public lecture at Stanford on May 12 they decided to try to make a photograph version similar to Escher's image (but with a Stanford theme) for that talk.

In order to get the necessary difference in scales, they needed to be able to take multiple pictures at different levels of zoom. They also wanted interesting, recognisable scenery. They went for photographs from the top of Hoover Tower looking down into the Quad near Memorial Church. Somehow they managed to get an intersection between everyone's schedules and took the photographs on March 27th 2003, when Hendrik Lenstra was in Palo Alto for a conference at AIM.