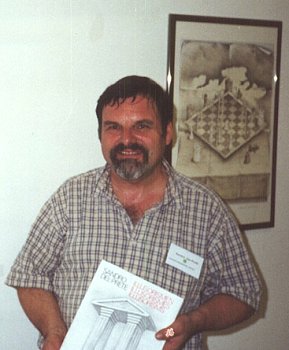 Sandro del Prete was born in Bern Switzerland in 1937 and went to school in Freiburg, where he obtained a diploma in commercial subjects. Drawing and painting had been his favorite hobbies since childhood, and so he traveled to Florence to attend the Art Academy of that City.

He went into business and subsequently got married. His wife Yolanda bore him two sons and always supported him in his artistic endeavors. Yolanda as well as many of the people he has met over the years has provided inspiration for his incomparable words of art.

In developing his style, Sandro del Prete coined the term "Illusorism", this means the process of representing optical delusions when drawing pictures. These optical delusions are actually illusions in the broadest sense of the word. The illusory effect of Illusorisms is based on intentionally misleading the viewer –, as is the case with illusionists (magicians.) However, it is founded on a completely different principle. The deliberate presentation of an "erroneous" perspective on certain plays of light and shadow, the interpretation of which is open to various explanations and can be used to create such Illusorisms.

Sandro Del-Prete strives to create works of the utmost detail and realism. In achieving his goal he has created artworks in which the borders between reality and imagination blur and have no definite outlines.