The Drunken Wineglass In Love 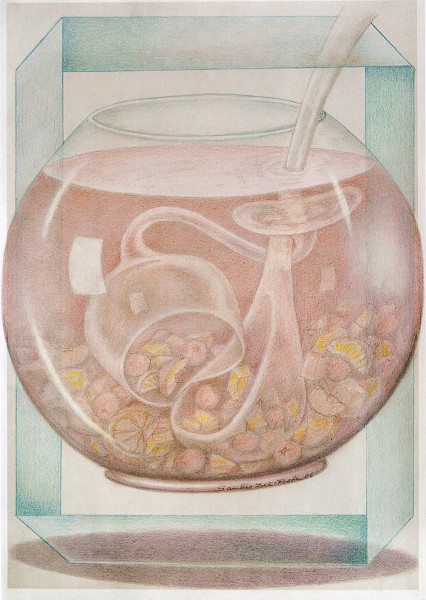 Illusions do not end in the optical world but often persist through oral and written langugage. Optical images, like music, are universally understood. Sadly, the same cannot be said of the written or spoken word, which, in response to common and widespread linguistic diversity, requires a process of translation to relay a precise meaning. The designs above have both optical and linguistic meaning; this time, however, the double-meaning is lost in translation. Please then, consider the following simple language lesson, to help you better appreciate this illusion:

The Love Story of the Drunken Glass

The dipper in the punch bowl has seen many parties and is a master in the art of seduction. This time, he was smitten by a seductively transparent drinking glass, shaped like a tulip. He tried to seduce the beauty, inquiring politely if she would allow him to "bewine" her, to which she shyly nodded in reply. She simple could not resist this "Sangria". Shortly after having been "bewined", the glass began to feel the sweetness of the spirits in her head and lost control. Her leg suddenly became weak. The dipper rushed to her aid and caught her, asking the slightly inebriated glass if he could "befruit" her, or deposit some sweet pieces of fruit into the glass. She again nodded in acquiescence, having a weakness for fruit, but the "bewining" and "befruiting" had a visibly enhancing effect! Meanwhile, the glass got completely drunk and fell totally in love with the gallant dipper. In her condition, she could no longer resist and fell head first into the bowl, straight down to the bottom, to join the dipper. Tenderly, she snuggles up close to her lover and allows herself, again and again, to be "befruited".

In the end, they become a couple, and unless they have since been violently separated, they are still together today, fruitfully united.