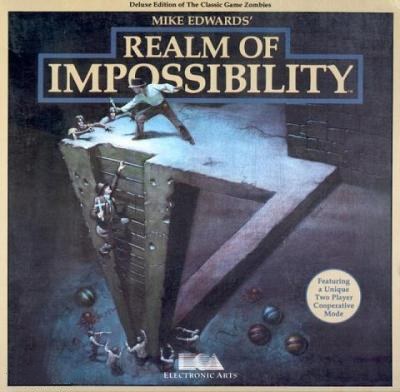 In 1984, when Electronic Arts was a much smaller software developer, software developer Mike Edwards created a revolutionary game that today doesn't get nearly the credit that it should. The game was well-named Realm of Impossibility.

The game was self-published by BRAM Inc. (organized by Edwards and a family friend) as Zombies. Producer Don Daglow acquired the rights for EA and re-named the game Mike Edwards' Realm of Impossibility. It was published for the Apple IIe, Atary 8-bit family, Commodore 64. In 1985 it was ported to ZX Spectrum.

The game title comes from the fact that many of the mazes in the game represent optical illusions, similar to those popularized by artist M.C. Escher. Surfaces that appear vertical turn out to be horizontal, and other illusions can confuse the player.

The game allows a player to traverse through 13 mythical dungeons to gather 7 crowns to defeat the evil cleric "Wistrik". Each dungeon comprises a dozen or so difficult rooms full of zombies, snakes, spiders and other various beasts. The object of each realm was to find a key or a crown. One of the more exciting aspects of the game allowed cooperative play on the same screen with another player. This gave rise to numerous strategies as the players tried to outwit the monsters together.

Fans of the game created a full map of the all 13 dungeons. Below you can see a part of Ethereal Plane with impossible constructions.

Some screenshots from the game you can see below.