Anatoly Konenko from Omsk (Russia) is famous for his mini and micro works. He began to create mini and micro artworks since 1981. He invented technology of writing on rice and poppy grains and later on human hair. He have done many micro works in various styles - graphics, sculpture, carving on wood and bones, juvellery and knitting.

The field, in which Konenko is well known, is creating and publishing of mini books. He have done more than 200 mini books since 1994. All his books have high quality binding and inimitable elegant ornaments and decorations. With the publication of his books Anatoly Konenko is an artist, designer, engraver and bookbinder at the same time.

In 1996 he created the smallest book the world with sizes 0,9 x 0,9 mm, which was signed in the Guinness book. The photo of the book you can see below. 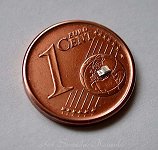 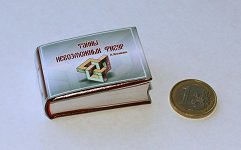 In 2007 he republished the book in new improved version. Now, the book became smaller, only 30x20 mm. Author colored his artworks and placed each figure on a single page. The book was published in only 30 copies. 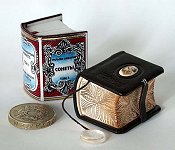 Click on thumbnail to see illustrations from books of Anatoly Konenko