Between Illusion and Reality

An acquaintance of mine first drew my attention to the pictures of M.C. Escher in 1979, when I had almost finished my first book [3]. It was profoundly moving for me to discover that I was not the only one to have such "crazy" ideas in his head with the ability to express them on paper. I was certain that M.C. Escher and I were kindred spirits, for our minds seemed to operate and analyze in a very similar way. Therefore I was able to understand very well what M.C. Escher must have felt when he began to deconstruct everyday phenomena, giving artistic expression to newly perceived laws, achieving astonishing effects with unusual combinations translated on to paper in ever more novel ways. Whatever could have triggered M.C. Escher to look at things in this way?

For me, it came through watching a chameleon. I asked myself what view of the world this little animal must have, being able to see in front and behind at the same time! So, I also tried to set down double views and perspectives on paper. It is very clear that I have been just as fascinated by the pictures of M.C. Escher, and he later influenced and inspired me greatly!

However, there is one very particular feature in both Escher's pictures and mine. For me, the idea behind the picture is the most important factor, and this cannot be copied. The idea gives the picture its meaning. In the introduction to his first book, Escher makes clear that his prints "were made with a view to communicating a specific line of thought" [1]. In his many descriptions and explanations of his work, both in lectures and in writing, he made clear his wish to express ideas as visual images. Naturally, technique and talent are essential to translate an idea to an image on paper.

There are differences between Escher's work and mine, however. I try to create aesthetically beautiful pictures with attractive, and sometimes humorous, characters. For this reason, you will find very little mathematical precision in my pictures, something that is always present in Escher's work. In this respect, he is truly a master who cannot be surpassed.

Although he often felt alone on his chosen artistic path, his work has inspired several contemporary artists. He can no longer be regarded simply as a minor figure in the history of art. Today, a hundred years after his birth, he stands at the center of a movement which has drawn artists from all over the world. These artists are not mere Escher imitators, but inspired by his spirit and his work, give original expression to their own ideas.

I offer four of my drawings to the reader as examples. 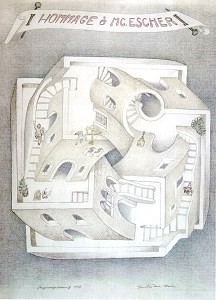 This building consists of four towers. However, the strange aspect is that every tower appears to start from the tower beneath it, and it is impossible to find which is the uppermost and which is the lowermost. The viewer can follow the staircase which leads "up" from one tower to the next without ever reaching the "top". 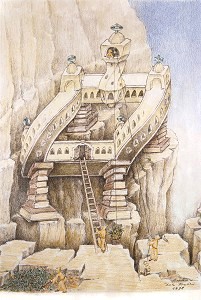 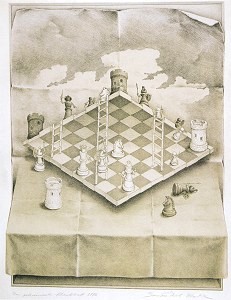 This chessboard appears curved at the center because the figures below stand on one side of the board, and those above stand on the other side. All lines, however, are drawn dead straight and parallel. The ladders appear twisted in spite of this. The curvature of the board is created solely in our imagination and by our perception of what is logical. 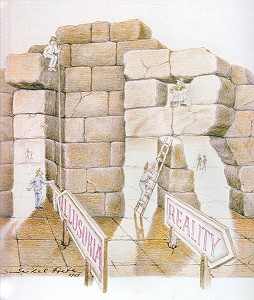 Stone blocks arranged into an immense yet ruinous wall form the boundary between these two worlds. It is an illusory construction made from stones weighing several tons, yet some of them seem to dissolve into thin air. This monument to the past thus gives rise to the perpetual question: What is illusion, and where does reality start?