Nelu Wolfesohn was born Romania. He graduated from the Faculty of Graphic Design of the Academy of Fine Arts in Jerusalem (Israel). He followed postgraduate studies at the Faculty of History and Art History from the Hebrew University of Jerusalem as well as advanced courses in design at the University of California in Los Angeles and Massachusetts Institute of Technology.

His career as a graphic designer began in Jerusalem and continued, when he went to Los Angeles. In 1976 he moved to Montreal (Canada) and in 1977 he became, for fourteen years, artistic director of the Lavalin Group. In the same year he also opened an office Nelu Wolfensohn Design, which specialized in the field of visual communication, especially in the corporate and cultural sectors.

In 1984 he became a President of Graphisme Québec 1984. He was a member of numerous committees and panels at events of national and international design.

His works were exhibited in many countries around the world and received more than 150 awards in Montreal, New York, L.A., Mexico City, Paris, Jerusalem, Seoul, Toyama, Toronto, Warsaw and Zurich. They are parts of various museums, libraries and private collections.

The poster below was created for a Celebration of Canadian Artists at Expo 86 in Vancouver (Canada). The figure in it is the formal integration of letters A R T into impossible figure. The letters A R T below the figure looks like an after-thought, but nonetheless it helps communicate the message by making the image easier to decipher. 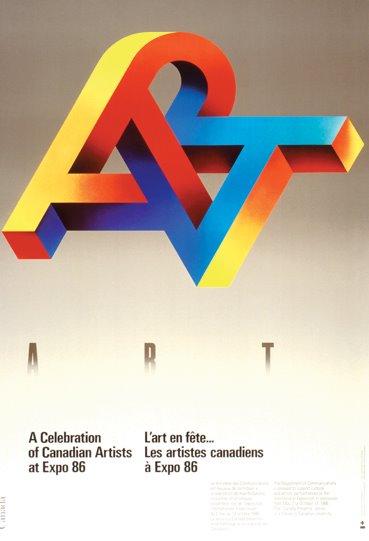