Precisely, impossible figures are geometrical figures, drawn on a paper, which look like projection of ordinary three-dimensional object on a plane. But in closer view contradictions of joining's of figure elements became evident. 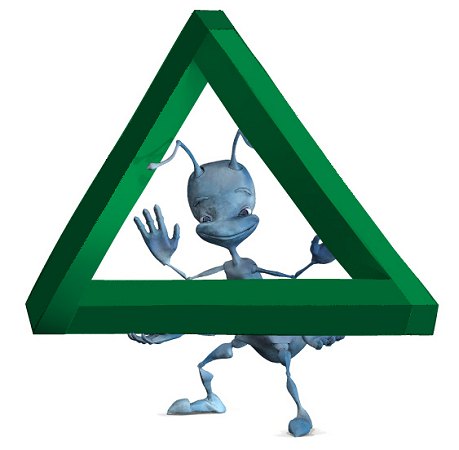 Impossible figures are distinguished as separate class of optical illusions.

Impossible figures are known long ago. They can be found as impossible constructions in icons of Middle Ages. The "father" of impossible figures was Swedish artist Oscar Reutervärd, who drew impossible triangle from cubes in 1934. For years of painting he produced more than 2500 figures.

Impossible figures took world renown after publication of article about two basic figure impossible triangle (which is also known as Penrose tribar) and endless staircase in British Psychology magazine by Roger Penrose and Lionel Penrose. Studied this article famous dutch artist M.C. Escher created three lithographs "Waterfall" with construction based on Penrose tribar, "Ascending and Descending" with endless staircase and "Belvedere". Inspired by Escher's works many artists around the world started using impossible figures in art. The most known are Jos de Mey, István Orosz, Sandro del Prete. Artworks by these artists and many followers constitute separate line in art - imp-art (from impossible and art).

It could be seemed that impossible figures really cannot exist in three-dimensional space. No, they can be created in the real world, but they look impossible from single point of view only. Distortions and breaks are visible from other points of view.