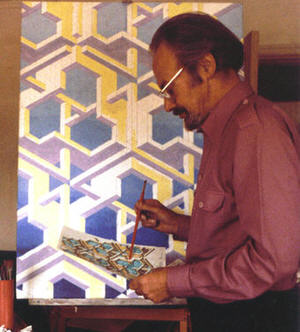 The artistic talents of Harry Turner (1920-2009) became apparent during his school years, as did a writing talent which he, personally, tended to undervalue. He developed a lifelong interest in space travel and science fiction in the 1930s, interests shared by his wife, Marion. He began to publish his own SF fan magazine, "Zenith", during World War II. He registered for military service in 1940 but he continued to work at the Anchor Chemical Company until called up by the RAF in 1942. After the War, he used his talents as a graphic artist (and a manager) to create an advertising department at Redfern's Rubber Works near Manchester, and joined the advertising department of the Manchester Guardian & Evening News early in the 1960s. Harry moved his family to Romiley (Greater Manchester area) in 1954, and spent the next 54 years of his life there.

During his long career as an artist, Harry Turner contributed work to both professional (prozine) and amateur (fanzine) science fiction magazines. His expeditions into the field of abstract art led to experiments with elements of business charts from his working life, which he turned into paintings in the 1960s. He was also interested in the graphics of perceptual anomalies, influenced by the work of Josef Albers. His exploration of the visual paradoxes which can be created on isometric drawing sheets led to his development of the "Triad" in the early 1970s, and the creation of his own niche in the world of impossible objects. Inevitably, some of his Triad designs found homes in science fiction fanzines courtesy of editors in search of something new and different.