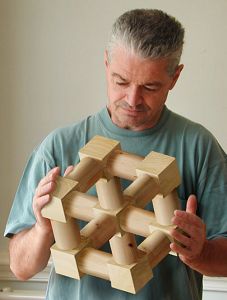 David Macdonald is an Englishman now living in Brussels, Belgium. He married to a Viennese, and have two multi-lingual sons. He view himself as a European. His family speaks five languages. By reason of his work, he traveled a huge portion of the world.

He is the son of a photographer. In the age of eight years he had already taking photographs and able to use a darkroom. His school background combined heavy emphasis on the arts and the disciplines of advanced mathematics and engineering drawing. This background follow him to come naturally in professional photography.

He is now in his forty-fourth year of lighting and photographing for film and television. His latest project, a major two and half hour Indian movie, Gandhi My Father, was released in August 2007.

His prime interest is the creation of photorealistic M.C. Escher-like illusions combining photography and computer-generated imagery. A number of these are published in illusion books and can be found on the Web.

Based on article from graphics.com