7. Planes, far and near at the same time

The inverted U shape in (a) is undoubtedly flat. In (b) it has a thickness, but it is clear than the front plane is still near to us and is still flat. We can also easily believe that the far side of this solid shape is also flat, although we have no evidence for this beyond the horizontal and vertical edges which are visible.

In (c) the shape has become thicker and a small cube has appeared on the scene. Still no problem. In (d) the cube has moved and immediately there is a conflict. P and Q are the same distance from us and so are Q and R. But P is definitely nearer than R. We have a figure where a plane appears to be at two different distances from the viewpoint, both at the same time. The result is impossibility. 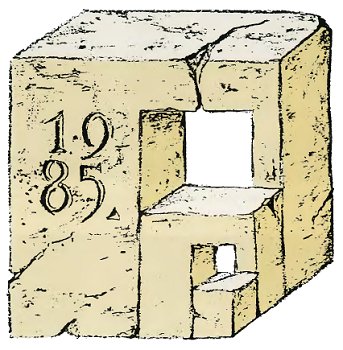 We can make a further impossible figure out of the small cube by using a still smaller cube. So the process could continue step by step for ever.... But perhaps three steps are enough for the moment!

We can pursue the same kind of game with three or more pillars which have a beam resting on them. Notice how the massive beam and the massive base establish a very strong sense of reality, which is then disturbed by the position of the feet of the pillars. Compare this figure with the one on page 66. The Belgian artist Jos de Mey has painted a great number of extraordinarily realistic paintings on this theme, inspired by the paintings of Magritte. 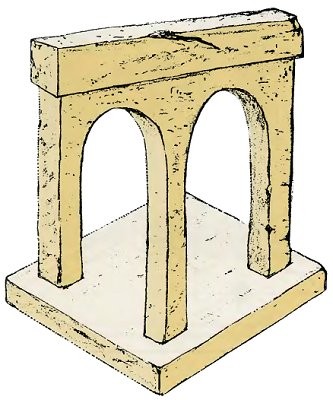 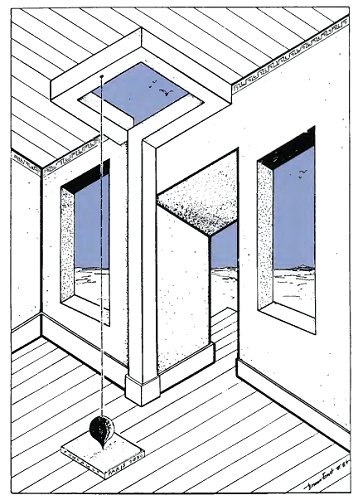 The thick wall with the doorway in it lies at two different distances from us. Drawings of this kind are made more interesting by introducing special details. Here a Foucault pendulum gives a very strong sense of the vertical direction. 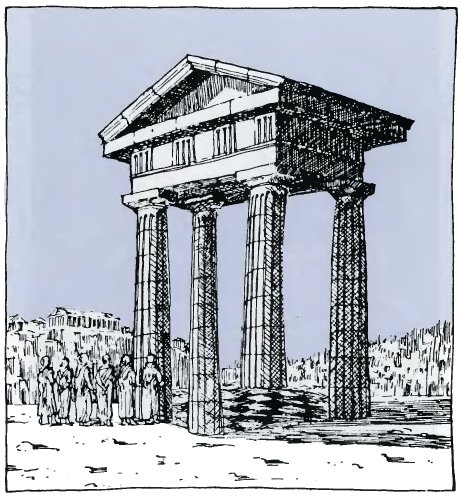 "All right! All right! I know you built this from the first draft of the plans for the Parthenon. I'm only saying that there must be some reason why the Ancient Greeks threw them away!"

An Example from the Fifteenth century 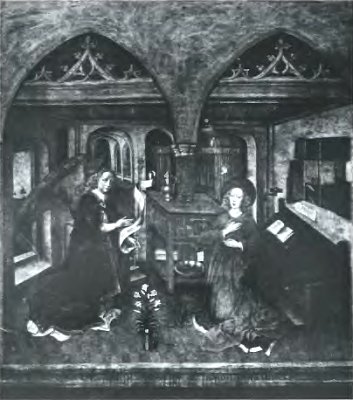 In 1902, during the restoration of the Grote Kerk in Breda in Holland, a fifteenth century impossible figure was discovered. It is the earliest one so far known and it shows the Archangel Gabriel telling Mary of her future Son. The scene is framed by the two arches, supported by three pillars. The two outside pillars are in the foreground whereas the middle pillar disappears behind a table. There is an obvious practical need to use an impossible figure like this because the painter did not want the scene to be divided into two separate halves.

The art historian J. Kalf described this picture in his book 'De monumenten de voormalige Baronie van Breda', published in Utrecht in 1912. He wrote:- "The picture shows a room divided into two halves by a (perspectively misplaced) red pillar with a grey capital..."

He described the impossibility as 'misplaced perspective'. How else could he have described it at a time years before impossible figures became accepted as having a reality of their own? We shall never know if the artist was having trouble in dealing with the laws of perspective or if he did consciously decide to draw an impossible figure. It would be nice to think he did! 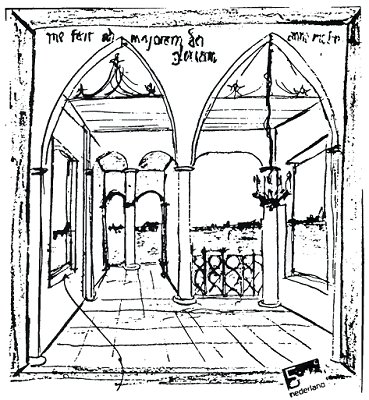 This drawing was inspired by the mural opposite and the idea of the impossible arch has been used more than once.

The Carceri by Piranesi

In 1760 a collection of lithographs by Giovanni Battista Piranesi was published which was called 'Carceri d'invenzione' or 'imaginary dungeons. This was an adaption of an earlier series of lithographs made in 1745.

Many writers have puzzled over these strange scenes and spatially mysterious images. Piranesi has not left us any clues to help understand them, but it does appear that he used impossible figures, either consciously or unconsciously.

This illustration is the left side of print XIV. 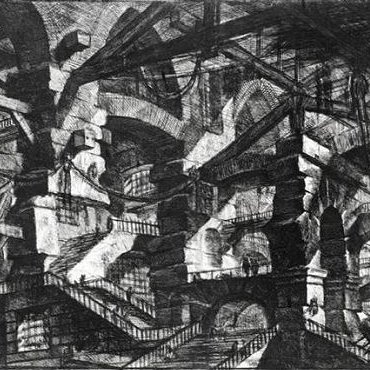 Figure (a) shows a very simplified diagram of the print. The impossibility occurs between A and B where the bridge marked C disappears behind the second pillar. Figure (b) shows the essence of the impossibility where the A,B,C correspond with the letters in (a).

Rudy Kousboek brought this print to my attention and described this detail as an impossible four-bar. In my opinion this is not exactly the case, but they are strongly connected.