Historically, mathematics has played an important role in visual art, particularly in perspective drawing; i.e., the means by which a three-dimensional scene is rendered convincingly on a flat canvas or piece of paper. Mathematics and art are two seemingly disparate fields according to contemporary views, the first often considered analytical and the second emotional. Mathematics does not play an overt role in most contemporary art, and in fact, many artists seldom or never employ even perspective drawing. However, there are a number of contemporary visual artists who make mathematics a focus of their work. Several notable figures in history paved the way for these individuals.

There are obviously no rules or limits on themes and ideas in mathematical art. However, there are a number of themes that have been widely used by mathematical artists. Some of these are described here, with examples. These themes include polyhedra, tessellations, impossible figures, Möbius bands, distorted or unusual perspective systems, and fractals.

This paper is intended to some degree to serve as an introduction to the Exhibit of Visual Mathematical Art held as part of Bridges 2001. The examples given here are taken for the author's convenience from a limited set of artists. The choice of works is by no means intended to be a representative sampling of artists working in this area.

2. Notable figures in the history of mathematical visual art

The Dutch graphic artist M. C. Escher (1898-1972) is in some ways the father of mathematical art. Mathematical ideas play a central role in most of his art, with the exception of his early work. Most of the themes commonly employed by contemporary mathematical artists were also explored by Escher, and his work is clearly a major source of inspiration for many contemporary artists. It is assumed that the reader is familiar with Escher's work, which can be explored in depth in the books cited in references 1-3. A number of other notable figures who are not as commonly associated with mathematical art are described in this section.

One of the common themes in mathematical art is polyhedra. These have been studied from very early on. Plato (427-348 BC) wrote about the five regular solids commonly known as the "Platonic solids". However, these predate him, and details concerning the original discovery of these polyhedra are not known. Plato related these solids to the basic elements, with fire assigned to the tetrahedron, air to the octahedron, water to the icosahedron, and earth to the cube. Plato further wrote: "There was yet a fifth combination which God used in the delineation of the Universe" (Timaeus, 55d-e), namely the dodecahedron. Archimedes (c 290/280-212/211 BC) described the 13 semi-regular polyhedra (see below). Just as the regular polyhedra are referred to as the Platonic solids, the semi-regular polyhedra are commonly referred to as the Archimedean solids. His writings on them were lost, together with the figures. They were gradually rediscovered during the Renaissance, and all 13 did not appear together until Johannes Kepler's Harmonices Mundi was published in 1619, nearly two millennia after Archimedes' death.

Leonardo da Vinci (1452-1519) is famous for his accomplishments both as an inventor and as an artist. His notebooks contain the first known examples of anamorphic art, which employs distorted perspective grids. These "slant anamorphoses" present objects that must be viewed at an angle to appear undistorted.

Johannes Kepler (1580-1630), best known for his work in astronomy, also had a keen interest in geometric tessellations and polyhedra. In his book Harmonices Mundi (1619), he published a number of tilings of regular and star polygons, in addition to the polyhedra mentioned above.

Koloman Moser (1868-1918) was a graphic artist who taught in Vienna and worked in the Art Nouveau style. He executed a couple of tessellations with fish motifs around 1899-1900 that are remarkably Escheresque in style, though Escher was apparently not aware of Moser's work until 1964.

Some of the twentieth century's best-known artists drew heavily on mathematics. Piet Mondriaan (1872-1944) was a Dutch painter known for his geometric abstractions; several of his paintings depict rectangular blocks of color separated by black lines.

René Magritte (1898-1967) was a Surrealist painter who often played games with perception. For example, one of his paintings blurs the line between what is painted on a canvas sitting in front of a window and the view outside the window.

Max Bill (1908-1994) was a graphic artist, sculptor, and painter who studied at the Bauhaus. He made a number of sculptures based Möbius strips, many of which are displayed in public places.

Victor Vasarely (1908-1997) was a Hungarian-born painter known as the leading pioneer and practitioner of Optical Art ("Op Art"). He used the coloring of simple geometric shapes, often in arrays, to suggest motion and concave/convex effects on a flat canvas.

Benoit Mandelbrot (1924-) is the mathematician largely responsible for formalizing and popularizing the concept of fractals. He discovered the Mandelbrot set, the best known of fractal objects. He also coined the term "fractal", derived from the Latin word "fractus", meaning fragmented or broken. His recognition of the esthetic content of fractals is shown in the following quote. "Can pure geometry be perceived by the 'man in the street' as beautiful? To be more specific, can a shape that is defined by a simple equation or a simple rule of construction be perceived by people other than geometers as having esthetic value - namely, as being at least surprisingly decorative - or perhaps even as being a work of art? When the geometric shape is a fractal, the answer is yes." [4]

A number of themes are commonly found in mathematical visual art. These include polyhedra, tessellations, impossible figures, Möbius bands, distorted or unusual perspective systems, and fractals. Individual mathematical artworks often combine more than one of these themes. Each of these themes is described below, with examples of artworks that employ them. 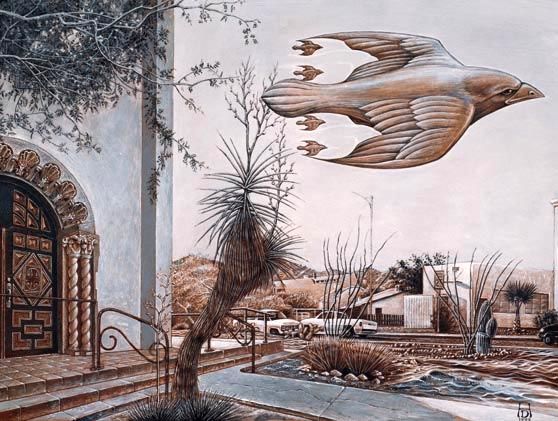 "Seven Birds", by Hollister David. This is a painting showing seven birds (two of which are defined by negative space) set in a landscape in the town of Ajo, Arizona. Successively smaller birds are shown, which fit together as a sort of fractal tessellation. The tail feathers of each bird cut out the middle third of an imaginary line drawn from wing tip to wing tip. Each of the outer thirds have their middle thirds cut out the same way by a smaller generation bird. If this process is carried to infinity, what is left of this imaginary line is a set of points known as the Cantor set, or Cantor dust.

"Fractal Fish - Grouped Groupers" (2001), by Robert Fathauer. This is a digital artwork printed on photographic paper. Waves are seen through the porthole of a ship, but on close examination it is seen that the waves are actually a fractal tessellation of fish.

An impossible figure is one that is depicted in a perspective drawing in such a manner as to appear normal at first glance. However, on closer examination, the viewer finds that such an object could not exist in the three-dimensional world. Escher employed such figures in some of his most popular prints, including "Belvedere" (1958), "Ascending and Descending" (1960), and "Waterfall" (1961). An example is shown below of a contemporary work by István Orosz. 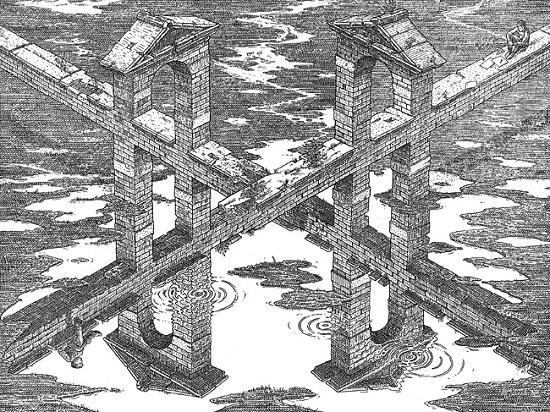 "Crossroads" (1999), by István Orosz, is a limited-edition print pulled from a metal engraving. The work depicts crossing bridges that could not exist in the three-dimensional world. For example, there are reflections where there are no bridges to be reflected.

A Möbius band is a one-sided object. This can be easily constructed by taking a strip of paper, giving it a half twist, and then taping the two ends together. Escher employed Möbius bands in "Horsemen" (1946), "Möbius Strip II (Red Ants)" (1963), and "Knots" (1965).

Unusual perspective systems, those with other than the usual one, two or three vanishing-point systems are another common source of inspiration. A related device is anamorphic art. Escher employed distorted perspective grids in several of his prints, including "Up and Down" (1947), "House of Stairs" (1951), and "Print Gallery" (1956). Dick Termes uses a six-point perspective system to paint scenes on spheres and polyhedra, as shown in the example below. 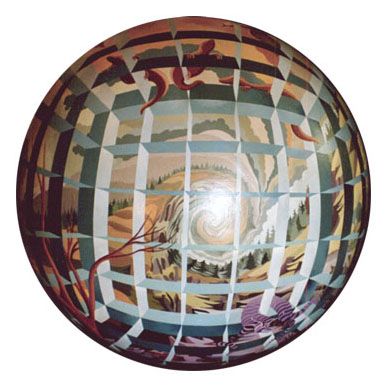 "Human Cage" (1978), by Dick Termes. "Human Cage" is a painted sphere in which six-point perspective has been employed. It depicts a geometric grid structure through which a landscape is seen. Tree branches poke through the grid, and reptiles crawl on it. As one studies the piece, one soon finds oneself in the cage.

The word anamorphic is from the Greek "ana" (again) and "morphe" (form). It refers to images that are so heavily distorted that they are hard to recognize without the use of a mirror, sometimes referred to as an anamorphoscope. When viewed in the anamorphoscope, the image is "formed again", so that it becomes recognizable. European painters of the early Renaissance were fascinated by linear anamorphic images, in which stretched pictures are formed again when viewed on a slant. A famous example is Hans Holbein's "The Ambassadors" (1533), which contains a stretched-out skull. The painting could be hung at the top of a stairway such that people ascending the stairs would be startled by the skull image. Anamorphic paintings that require cylindrical mirrors were popular in both Europe and the Orient in the 17th and 18th centuries. These sometimes carried messages of political protest or erotic imagery. Escher didn't employ conventional anamorphic grids, though he did employ mirrored spheres in some of his prints, including his best-known self portrait, "Hand with Reflecting Sphere" (1935). An example is shown below of a contemporary cylindrical anamorphosis by István Orosz. 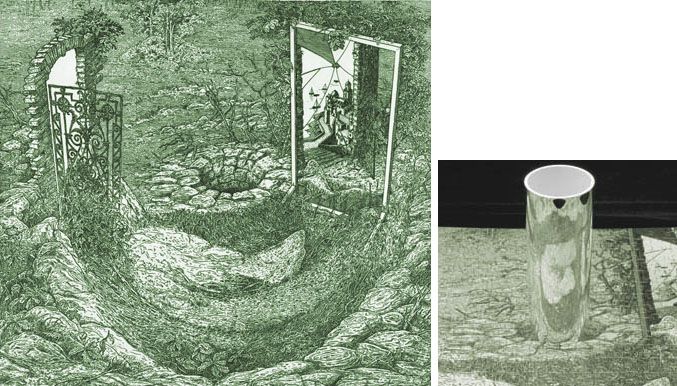 "The Well" (left, 1998), by István Orosz. "The Well" is a limited-edition print pulled from a metal engraving. The work commemorates the 100th anniversary of M. C. Escher's birth and references his life. Escher wrote about his excursions into mathematical art as walks in a beautiful garden where no one else was to be found. The gate at the left of the print separates Escher's garden of the mind from the physical world. The broken mirror at the right of the print shows the small town of Atrani on the Amalfi Coast in Italy. Escher loved this area and lived there for a time; he depicts this town in his second and third "Metamorphosis" prints. If a cylindrical mirror is placed on the well in the print (shown at right), Escher's face appears as if by magic.

A fractal is an object exhibiting self similarity on different scales that can be related mathematically. Fractals are created by iteration, the process of repeatedly carrying out a calculation or process, so that an object of great complexity and detail is obtained. Unfortunately, fractals as such were not a tool available to Escher because they were not formalized and recognized as a distinct branch of geometry until around the time of his death. Escher was very interested in depicting the infinite in a finite area, particularly infinite tessellations. He employed reducing grids and hyperbolic geometry to accomplish this, as seen in his "Circle Limit" prints I-IV (1958-1960) and "Square Limit" (1964). Examples are shown below of contemporary works by Kerry Mitchell and Robert Fathauer. 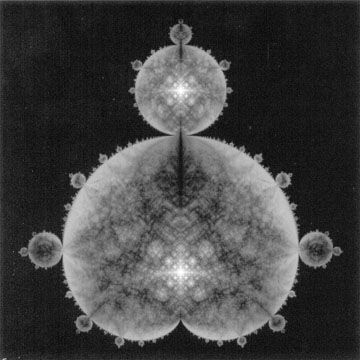 "Buddha", by Kerry Mitchell. "Buddha" is a digital artwork printed on photographic paper. It is a grayscale image based on the Mandelbrot set, a computational fractal discovered by Benoit Mandelbrot.

"Circle Composition I" (2001), by Robert Fathauer. This is a digital artwork printed on photographic paper. It is not a computational fractal, but rather was constructed graphically. It is based on a packing of smaller circles within a larger circle.

Mathematical visual art is flourishing today, with numerous artists creating works in the tradition of M. C. Escher and others. These artists work in a wide variety of media, including sculpture, painting on both flat and three-dimensional "canvases", print making, and digital art. Themes that are popular with these artists include polyhedra, tessellations, impossible figures, Möbius bands, distorted or unusual perspective systems, and fractals. The Exhibit of Visual Mathematical Art at Bridges presents a cross section of this work.