I would like to represent a very interesting concept of a book about impossible figures in art and design. It's a degree work of a student from Venezuela Carlos Larrota. He is a student graphic design of the University Institute of Technology Antonio José de Sucre and arts in the Universidad de los Andes in Mérida. 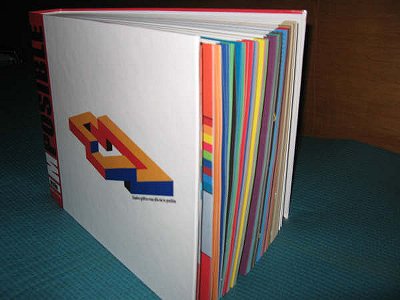 The book begins from history of impossible figures from middle ages, when they were mostly casual errors of artists, to nowadays, when some artists depict impossible figures purposeful. Author collected artworks with impossible figures by numerous artists around the world. There are artworks in the book of artists who became classic in impart such as Oscar Reutersvärd, M.C. Escher, Jos de Mey, Sandro del Prete, Istvan Orosz. Also, the book cantains artworks by less known modern artists Vicente Meavilla, Tamas Farkas, Dmitry Rakov etc. Each series of artworks begins from special title page, which contains a simplified sketch of the most recognizable artwork of the artist. Several of them you can see below.

Also, author designed some broadside title pages. Two of them you can see below.

You can see some pages of the book below. Pages of every section are colored to the color of the title page of the section and sometimes has design, which differs from other pages.

Conclusion. The book gives wide field of view on impossible art. It demonstrates artworks by many famous artists and some modern artists, who use impossible figures in their art and design. It will be useful for artists and other people, who are interested in optical illusions and paradoxes.