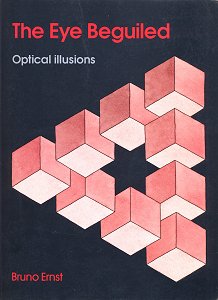 Impossible objects are phenomena which cannot exist but which we can see all the same. They captivate the imagination and tantalize the viewer with their mysterious fascination. They illuminate something of the remarkable process of vision, as our brain is forced to accept a situation of visual conflict which it never encounters in the outside world. Amongst the first to concern themselves with impossible objects were Oscar Reutersvärd and M.C. Escher.

When Bruno Ernst - the pseudonym of J.A.F. Rijk began preparing an exhibition of the work of these artists in 1983, it emerged that many other artists all over the world had also discovered impossible and ambiguous objects as a source of inspiration. The publication of more than one hundred articles since 1970 is incontrovertible evidence of the close attention which the subject has attracted amongst theoreticians, too. This interest prompted the author to undertake an exhaustive study of the field, in the course of which he encountered no less than fifty artists working with impossible objects. The results of his investigations are found in this book, in which Bruno Ernst guides the reader, with the aid of numerous examples and illustrations, through the wonderful world of optical illusions and visual realities.

The Dutch author Bruno Ernst has closely followed the development of the works of M.C. Escher from 1956 onwards, and has published his observations in, amongst others, The Magic Mirror of M.C. Escher and Leven en werk van M. C. Escher.